Watermelon Komucha is certainly the most recently awesome brew I've tried yet. It's summer, watermelon is available and I'm up for eperimenting. What can I say? Though I"ve labled it as Watermelon Kombucha, I did actually add the juice of a fresh lemon to it and, while this is a personal taste and you can choose to add it or not as you like, I thought the tartness of the lemon added something to the flavor.

Just so you know, this Watermelon Kombucha brew is a bit more messy than my last try of Blueberry Lemom Kombucha. But if you want to have a go at it, I'll list all the things I did in this post.

Have Your Watermelon Kombucha Ingredients Ready to Go

One of the first things I did, and that you need to do, is make sure you already have a brew fermented and ready to do. Refer to how to make kombucha, In a nutshell, you will brew several bags of black tea in a gallon of water, let cool, and add sugar. About a cup for a gallon but this is personal taste. I find if I am adding things for a second ferment, such as apple juice or like the watermelon I will be using here, then it just gets too darn sweet. When cool, add your scoby, cover and place in an area out of direct sunlight.

After about 7 to 10 days, your kombucha should be ready for this recipe and the second ferment.

I used a personal sized watermelon. They really arent all that big and in this photo, you can see my fingertips next to the melon. It's pretty small. I took only a third of the melon to to make my kombucha. I didn't measure it, but it really doesn't matter. If you end up with a 1/4, 1/2 or better giver or take, it just will be a bit more watermelon kombucha in the end for you to drink. 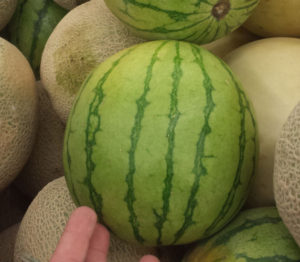 After scooping out the amount of watermelon you want to use, chop it up a bit and place in a saucepan with sugar. This is just to melt the sugar.

I tried cooking and mashing the watermelon, but unlike the blueberries, it just wouldn't mash 🙁    So I simply resorte 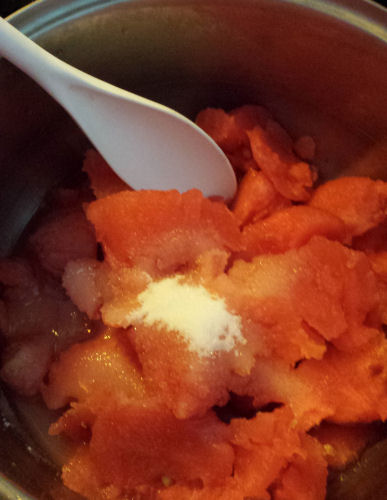 d to using a blender, after the mix was cool of course and blended until I had a nice creamhy mix.

(At the left, you can see what large chucks the watermelon is in. And as easy to cut and eat as watermelon it, it's NOT easy to mash!)

I used only about 1/3 of sugar or less for this, simply because the watermelon is already so sweet. But your kombucha will love it as they get to 'feed' on the sugars in this fruit.

After it's been blended, there is really more pulp than i realized. It's wasn't quite as juicy as the bluebberries, but I figured I had some this far, I wasn't going to waste the watermelon. So….out came my strainer. 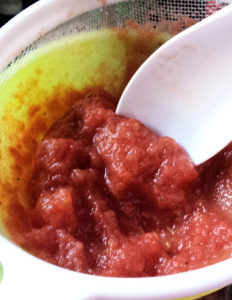 I put the watermelon into the strainer to allow some of the juice to drip down. When it slowed, I took a spoon and mashed it a bit to squeeze a bit more out of it. There was some watermerlon fruit in the bottom of the kombucha but I left it there as I knew the sugar would give the scoby more food. Don't throw out the reaminder…it goes great in jello or smoothies! and there are still plenty of vitamins in the remaining pulp.

I then covered the jar and kept it in an area for about 7 to 10 days. Then I squeezed the juice of one lemon into the mix and bottled the kombucha to enjoy on a VERY hot sumer day.

Though messy, the flavor of the watermelon kombucha was better than I thought ti would be. If nothing else, it's an experiement and I"m sure, one you'll love to drink 🙂

Not sure where to get your SCOBY starter? Here is where I got mine.
Starting Komucha and not sure what you need? Here are my top 6 Most Important Must Have's….