Whenever I have an idea in mind for some new crochet item, or sweater or even a blanket, I like to test stitch samples to see how it will look. Or, if possible, create my own and combine different ones together. The combinations of stitches in needlework are endless, really, and as much as I hated math in school, these patterns are really mathematical equations. If you think that kind of ruins the magic of crochet and design, it really doesn’t! It just means you get to have more fun creating and designing than ever.

But today, I just wanted to get this post up so that you can have something fun and easy to do. Maybe you have some small project in mind that you can make up today and give as a gift tomorrow. Who knows? Or leave this stitch to combine with another for a more advanced project down the road, like the sweater I am working on in a denim ombre color….wait til you see  it 🙂

Anyway, here is this simple and versatile stitch in all of it’s beautiful glory. Enjoy!

Chain length desired in multiples of two. Example, I am making a sweater and currently working on the back. I crocheted a chain of 82. Since the stitch is so beautifully simply, it’s a pleasure to work with and super easy to keep track of with only an even number of stitches. After you have chained the length you want, chain one more and turn. Sc in each one of the chains to the end. Turn and chain three.

In the example below, I have already worked my base row,  my first pattern row and my first return row of all sc.  I am now working the second pattern stitch in the 4th row.  This row starts with a chain 3.

In the example above, I have already worked my base row,  my first pattern row and my first return row of all sc.  I am now working the second pattern stitch in the 4th row.  This row starts with a chain 3. 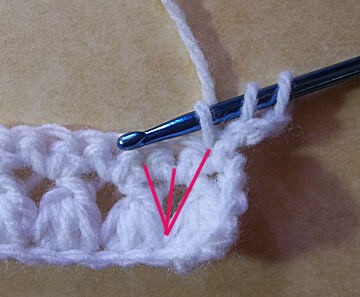 In the first space after the ch 3, make a half double crochet by making a yo on the hook, then slipping through the space (first red pointer at the right) and pulling through a yo. DO NOT pull through the other two loops on the hook, but instead, yo and

[quads id=1] slip the hook through the next space (middle red pointer) and pull another loop through. Do this once more on the last space on the left (red pointer on the left). 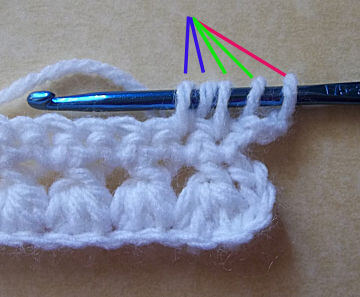 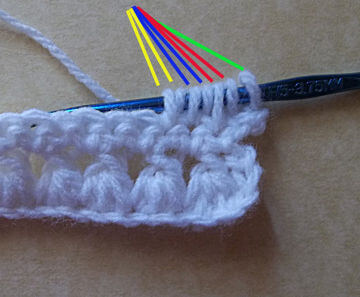 You should now have 7 loops on your hook, including the last two you put on in the 3rd space (yellow pointers). 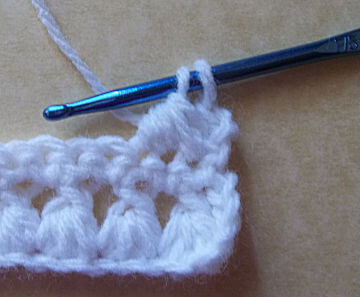 Yarn over on your hook once more, then pull through the first 6 loops on your hook. You should now have only two loops remaining. 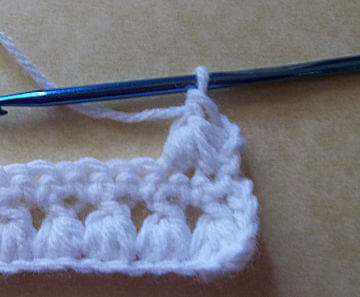 With only the two loops left, yo on your hook once again and then pull through the remaining two loops on the hook. At this point, you have just completed the first Triple Half Double Crochet Stitch. Good for you! 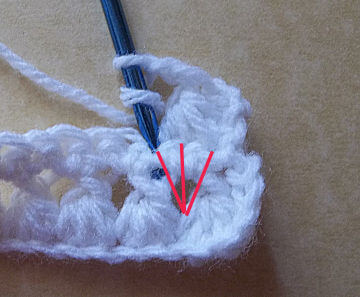 After the first chain 1 at the beginning of this row, your first Triple Half Double Crochet is working in the next 3 spaces. You can see with the three red pointers where they were actually worked on the base of the previous row. But…………

…………..all THDC stitches along the remaining row will be worked by making the first HDC in the end of the previous stitch. In other words, place your hook in the space of the base of the previous ”hdc shell”s   last hdc stitch. Then work the next 2 stitches as before, yo, pull through all 6 loops on the hook, yo and pull through the remaining 2 loops. Chain one, then make the next THDC as the just made. At the end of each THDC shell row, you will find yourself with one last sc space at the end. HDC in the last sc space, ch 1, turn, sc across the row, turn, chain 3 and begin again. If it helps, look at the last photo below. 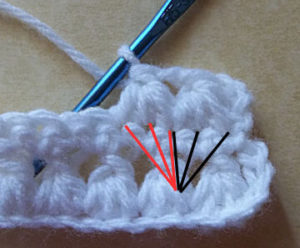 That’s it! Such a simple pattern makes such a fantastic stitch for so many things. Be creative! Feel free to post what you made in the comments.