The Top 43 Obscure and Crazy Facts About Denim

I have a love affair with denim blue jeans. It's rugged, it's long lasting and wears well, it's a cool earthy blue color, it hides dirt, and it can be re-purposed into almost anything. Way back when I was first married, my boys were small, we weren't' on a budget….we were so broke we didn't even have a budget! 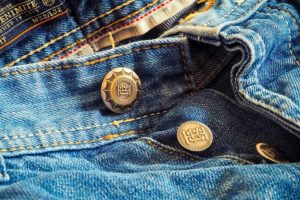 We had an old sofa that needed recovering and #1 I didn't know how to really do it, (which I eventually learned how to do) and #2, I wouldn't have been able to afford the upholstery material for it. Even back then, material was about $20 and $30 a yard. So that idea was out. In the end, I decided to make a slipcover for it. The beauty of it was that old used denim jeans are readily available almost anywhere these day and the time I was able to find plenty to work with in thrift stores. With a fairly large supply I cut and sewed and pieced together a simple and effective slipcover that made the old sofa look nice and was easy to remove and wash. Exactly what was needed for four little boys and ranch life.

Denim fabric has been around forever it seems like, but we take it for granted because it's such a main part of our lives. But where would we be without it? What other fabric would make such great work jeans, jackets or patch rugs? While society today has glamorized denim, it's still a staple clothing item in the traditional work force.

But where did it come from? Who made it? Why did they pick blue? If you have ever had these questions and more, you're about to find out a lot on the background history of denim.

Unusual Facts About Denim That Most People Don't Know About