When I was first given a box of yarn, I truthfully had no idea what to do with it. Honestly, while I am a collector of various types of yarn in many sizes, brands and colors, this yarn was one I would never have chosen to buy. So…what to do with it?   Hmnnnn……

I had been a fan of the Mile a Minutes Afghan patterns of decades ago and really loved them. What’s so perfect about them is their versatility and the way scrap yarn can be used up to make them. I thought this would be an excellent way to use these skeins.  In my house, yarn multiplies secretly in the dark. i always feel I end up with more than I started with. And after each finished project, I have a bit left over that I try to do something else with. When I’m not able to finish, I have to either get more, or rework my idea.

Instead, I just started crocheting and making up stitches as I went. When I was done with one row, I added another in a contrasting color. I figured that my alternating colors would stretch the yarn amount out and give me more to work with to complete some kind of project, although I didn’t know what. Just something. Maybe a small lap-robe.

When I first began,  I didn’t like the stitches. Once, after several rows, I realized the yarn wouldn’t work out, so I ripped. Then started over. Then ripped again. On it went until I finished the small prayer shawl I ended up with.

How Much Yarn Was Used in This Prayer Shawl?

To be honest, I don’t even have a weight amount as the yarn I was given had the bands torn off. I didn’t weigh it before I started either….dumb me. However, the pattern is flexible. If you are eyeing your crochet stash, you probably have an idea of whether you can make a large or small project. Maybe you have such an odd assortment of colors you want to create your own Joseph’s Coat….no big deal as long at the ply is all the same. After all, an afghan of many colors is ok as long as you don’t mix sports weight with fingerling yarn!

The pattern itself doesn’t count the exact amount of stitches because it would fluctuate from one project to another if your base row is of a different length each time. Instead, when you work on the base row and decide how long it’s supposed to be, the pattern works from the center point at each end to determine where increases are to be made. Thus the length of the beginning base row doesn’t matter. Nor does any the stitch amount in any subsequent row matter either. Nice, right? 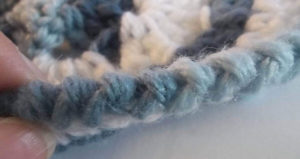 To make this prayer shawl pattern, I crocheted a base row of 74 shells. From there it was a simple matter to go around and increase at the rounded ends of each strip.

I had some cream colored (RED HEART) yarn on hand, the variegated blue I was given, a crisp white and denim blue that I  had from Hobby Lobby. More than enough to crochet 3 or 4 strips and add them together.

And don’t worry…..I took a lot of pictures and diagramed them for the instructions. 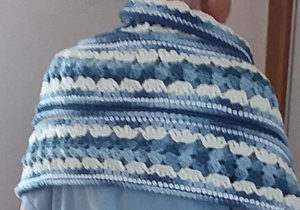 The variegated blue yarn makes a stunning contrast with the off white shells of the second row and the final contrasting row that stitches the strips together.

Full instructions are in the pattern, and I did my best to diagram and color code everything to help make understanding it better. Got stuck on part of the pattern? Caught a mistake I made? Leave me a message in the comment section below.