Ditch the round needles for 75% of knitting a yoked sweater! 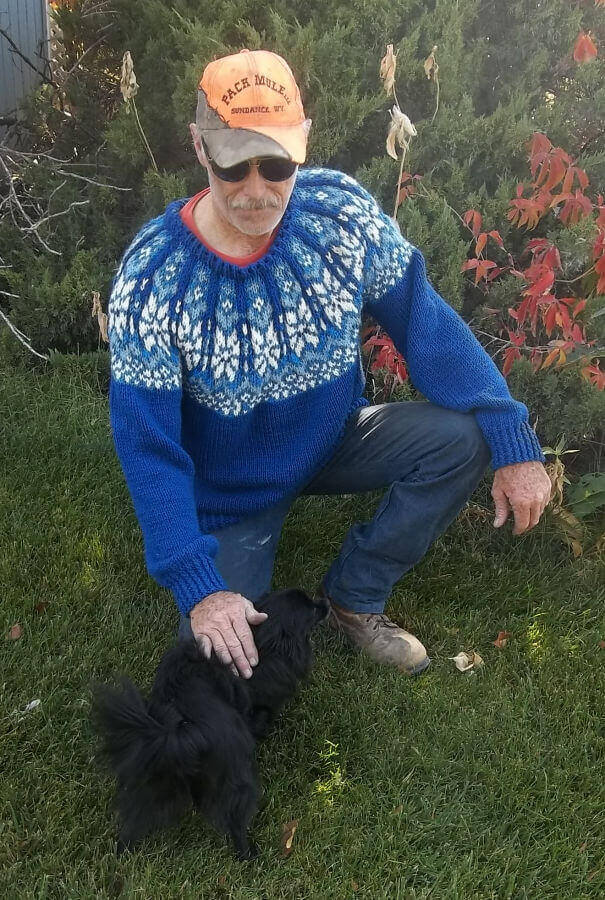 I made a promise 6 years ago to knit a men’s norwegian fairisle sweater with a snowflake style pattern. Yes, I can knit and very well, too, but I kept putting it off because I just hate working with round needles.

I understand the convenience….I even understand why they are popular with so many people (other than me of course!) but I don’t like to work with them. So….that explains the 6 years of delays and excuses.

When I finally got myself motivated, I picked out this pattern. (I will tell you it was a stinker to do, though.) After picking out the yarn and the colors I knew would look good on the person I was gifting this sweater to, I started with the round needles and began the ribbing. I knit the continental way, as I was taught,(and I knit fast….) but it felt like it was going on FOREVER. After forcing myself to knit to a certain point, I gave up. Ever do that?

Do You Really Need Round Needles?

Anyway, here’s the deal….the round needle is specifically for making 2 things much simpler. It means your sweater will have fewer seams to stitch at the end and it keeps a pattern stitch going in the round without any break in the design. Do you really need them? No, but for the yoke I consider it certainly convenient, if not essential.

I didn’t lose any sleep at night over the first problem. While some people hate stitching the seams, I don’t mind. And for the most part, if you take a bigger seam on the edges and use small stitches, with patience and skill you won’t even see a seam edge.

Ah….but a seamless pattern??? Not so easy without round needles. So, after some thought, I decided that I could split the sweater in half. I would knit the front and back piece to the armpit on straight needles and do the same with both arms. When I had completed all four pieces, I slipped them on the round needle to begin the graph pattern.

Now, purists might tell you that this can’t, or shouldn’t be done, but my question would be “Why not?” As I previously mentioned, with care your stitched seams won’t show. And if they do, well there are millions of sweaters out there that are NOT knitted in the round and they are well made. So, does it really matter?

Not to me and as it turned out, it didn’t matter to the person I gifted this to.

Another thing you might want to consider is your time. I had 7 projects to work on for Christmas t year. I spent the most time on this one piece and having it drive me crazy was not an option. I wanted speed….AND quality and sewing interior seams appeared to be a small sacrifice to make.

I worked on it for some time and not getting more than a few inches past the ribbing. Then I tore it all out and worked on the front with straight needles. Here’s where it got interesting….in one day I finished the front up to the arm pit. The next day I did the same with back. Both sleeves were finished in a day an a half (all this along with my regular day of dishes, vacuuming, feeding the pets, etc, etc) yet working on the yoke pattern took me two weeks!!

NOTE…to be fair, it wasn’t entirely due to the round needles but partially to problems I had with the pattern and it’s decreases. 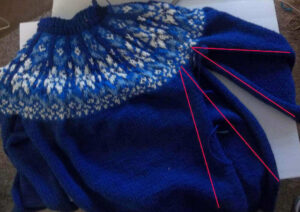 You can see the end result on this page. You decide…Round needles a must? Or does a good old fashioned compromise work?

The sweater is gorgeous, I was happy with the end result and the giftee  loves it. That settles it for me. Happy knitting!

Joyce Hobbs; thevictorianneedle@yahoo.com (Jan 31. 2020)
The sweater is absolutely gorgeous!! If giftee is happy it doesn’t matter how it was made. And your speed is incredible!! I think I hate you…LOL I am an English style knitter and it can take me 3-4 days to get one side of a sweater done. Happy knitting Madeline. Oh….I LOVE your stories!!!

Madeleine Jacobs; rawhidegifts@yahoo.com (Feb 3. 2020)
Yes, I knit it seems I knit too fast, but I love how I can get several sweaters done in a year. Just FYI, the giftee WAS very happy and had no problems with the sweater. Thanks for the story compliment !!