Since I"ve been making my own kombucha for some time now, I've not really been aware of how expensive it is. The 'cheapest' placeI found it today was 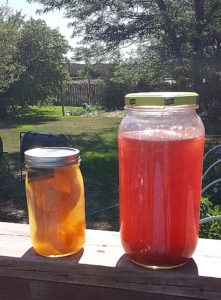 Walmart and I still thought it was pricey. For a ,,,,,,,,,,, I paid almost $3.50. When I figure that my initial cost was the scoby, which wasn't pricey at all, and I already had a slew of glass jars, the remainder of my cost was black tea and sugar. For flavored kombucha, I have a bit more expense but for the amount I get out of it, well, let's just say I get my money's worth.

Currently, as you can see to the left, I have a quart jar of already brewed kombucha that is now double fermenting with another bag of tea to keep the scoby strong, and a half a can of mandarin oranges. Yup, that's it; No special reicipe here. I just dumped a  half can in and am letting it double ferment until ready.

The larger jar is a bit more work because it's watermelon lime and I had to buy limes and a watermelon. But you can see it's a bit larger than two quarts. I figure I have about $5 total in the entire mix, maybe $6.

Now, don't get me wrong….store bought kombucha is great! I love the zippy gingery taste of many of them, although I don't use ginger a lot because of it's price. And when I do get it, I ofter forget to use it all up before is shrivels But the flavor is fantasic!

However, I'm sorry….I just don't want to pay the price for storebought kombucha when I can get the kind of flavors I want, the chance to experiement with those flavors and all for a fraction of the price.

If fizz is your main reason for getting store bought kombucha, let me tell you that you can get a LOT of fizz from homemade. You can do this simply by letting your kombucha ferment a bit longer or by doing a double ferment as I did with the watermelon and the oranges. 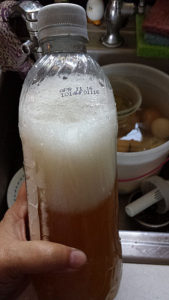 No, I didn't not shake the bottle up 🙂 But it is indeed very fizzy as you can see. I had to wait a bit before I could open it as I've had that stuff all over my cupboards, floors and walls once and was not anxious to clean up another mess like that one.

It should be noted that if you do a double ferment, you need to keep an eye on it and not just stick your kombucha in a corner somewhere for a week or more, hoping for the best. You want to keep checkiing to make sure it's doing ok, that there is no mold growing on it (in that case there can be several issues such as a dirty jar, unwashed fruit, dirty hands when making the brew…) or that it's not turned to vinegar. In that case, toss it out and keep the SCOBY.

My sister has recently starting making this on her own and she called the other day saying her komucha tasted awful! Either she brewed and let it sit too long for a ferment, or it got too hot. Or both. This time of year is great as it's warm enough to brew when often it's too hard to get a brew started in a cold kitchen in the winter. However, it can definitley get too hot as well. So…keep an eye on it!

Honestly, I think if you love the taste of this drink, it's worth the time and the effort to do it and to do it right. Even today, my favorite flavor is still the blueberry lemon. But it's summer….I want to try cucumber melon, I want to try peach clove, I want to try strawverry kiwi….The summer is the time for these crisp, cool fermented teas and they are great at picnics, barbeques and family outings. Take a gallon with you instead of pepsi or coke and  think of the enormous health beneifts you would reap from something like this instead of  a soda. Hands down your mmune system will be the winner and will thank you for making the sacrifice for a healthier choice.