I got my first taste of kombucha and water kefir from a friend. I love it. And she gave me some of the most bsdic instruacitons on how to make it so i figured it coudldn't be too hard. I did some additional research not only because I was curious, but because at one point I had eventiually killed my original kombucha! I was pretty upset and felt stupid, so I did more researching and I ordered more….

I found out that, though simple and pretty basic, there is somewhat of a learning curve. I also found out that what one site recommended, another site said was incorrect. Which was it? I wondered.

Over the course of the first several months and then finally a whole year, I've found out what works best for me. By no means will I tell you that making kombucha tea my way is the only way to brew it. Nor will I tell you that if you do it differently that it's not going to work. I'm just willing to share my ups and downs with kombucha making.

Can You Make Kombucha Wrong?

If you are wonderig if you make make a mistake while brewing kombucha, or that it can be made incorrectly, you'd be both right and wrong. For instance, kombucha requires sugar as a nutrient to grow and be healthy. I've used regular sugar (and it works fine) but have since switched to a healthy organic sugar with no chemicals. If I'm going to drink the stuff to be healhty, I might as well make it healthy right? The water used should probably not contain chemicals and it goes without saying that using clean utensils and washing your hands is always a good idea 🙂 I use my own well water and do not boil it. However, I have had my water tested and continue to do so daily. I've heard that using filtered water doesnt give the kombucha the minerals it needs. But hey…try it for yourself. See what your new SCOBY'S like best.

But there are many advocates of boiling your water first, sterilizing your equipment before brewing and so on. Certainly there is no harm in it! and I don't think it's a bad idea at all. In fact, during canning season I sterilize all my jars, lids and equipment, so why would making kombucha be any different? That being said, kombucha has been around for a looooonnnng time…centuries for certain. And I'm pretty sure that people survived drinking it under less than choice circumstances or we wouldn't have it today.

I would say go ahead and sterilze your equipment before starting. Me? I just did a good wash with old fashioned soap and water. That included my hands. Don't forget those 10 little piggies! They can pick up a lot of dirt.

What's the Next Step to Make Good Kombucha?

Before you start, get some tea and sugar ready and have a clean quart jar washed, sterilized and cooled. I personally use a black tea but my niece has used loose leaf black tea and her SCOBY (symbiotic culture of bacteria and yeast) just love it! I think of my scoby as a pet. 🙂 Or with the amount I know have, little animals that are always needing a meal. And I can 'tell' when they are happy. I can tell when they aren't 'feeling' well and by now I know what to do and what to change.

Black tea has a lot of nutrients in it which the SCOBY love. It keeps them well fed and healthy. Along with quality sugar. My SCOBY are 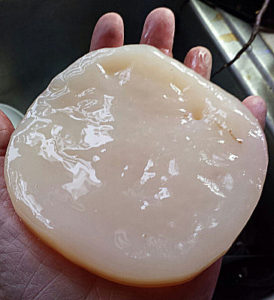 My own Home-Brewed Kombucha SCOBY

thick and gelatinous. When they have a thin, filmy look, they need some TLC. They will still ferment your tea and make kombucha, but it might take longer.

Once your container, plastic spoons etc are cleaned, cooled down and ready, it's time for you to jump in. In the winter I usually heat up a quart of water and brew 2 bags of tea. In the summer, I just make a sun tea on my porch. In general, I have two bags to a quart and about 2/3 cup of sugar. Some recipes call for as much as a cup, I find that a smaller amount still ferments just fine and that I like the flavor. More than that is too sweet. You might find 2/3 a cup too much and will want to adjust it to 1/2.

Let that sugar dissolve fully. When it is, and your brew is cool, you can add your SCOBY. If at any time during the next week to 10 days you require stirring, use a clean plastic spoon to stir. Metal spoons can damage or even kill your culture.

Set this jar in a darker place out of direct sunlight and allow your baby to do it's thing for the next 7 tp 10 days. Either keep a plasic lid loosely on t 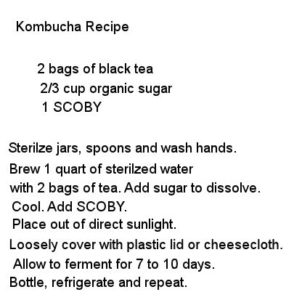 he top or cover the jar with cheese cloth to prevent fruit flies from having an early Thanksgiving of your kombucha and enjoying all your hard work.

After 7 days, test and see if the taste it to your liking. If not, brew a bit longer. If it is, bottle most of it, (keeping a bit left as a starter to help boost your SCOBY) and refrigerate.

Later, I will tell you a bit more about whether it's considered a safe drink, what people ask the most about SCOBY, recipes for making different and delicious fermented teas,  and how it got to be so popular. For now, enjoy your new and healther 'soda'!

Not sure where to find  SCOBY cultures? Here is where I got mine.