As a teenager, and living in Ft. Laramie at the time, it was just a matter of course to work at the old Fort. Back then, the fort was really big on doing what we called the Living History in which we dressed in period costume of the time and were well versed in the history to supply any answers to historical questions to visitors, and the Midnight Tour was our summer highlight.

That was the grand finale of the summer, when several of the buildings such as the jail and bakery, held a small skit in front using employees and volunteers dressed in the period of the time. Tourists and locals alike loved it!

I personally liked walking the grounds at dark, after everyone left, hoping that I’d hear or see a ghost from one of the many buildings that are reported to be haunted. I never did. Not one. Not ever. Today, I”m not 100% sure I even believe in them. Not for any reason other than it doesn’t fit scripture in my opinion, but there are still some fun ghost stories told about the old Ft Laramie grounds and their still well-kept buildings. And, because i lived there, I love hearing a good old Fort Laramie ghost story! They make some wonderful campfire stories and here are just a couple of Ghost’s of Fort Laramie stories….

The Lady In Green

Ft Laramie was not always Ft Laramie, but was a trading post of the American Fur company. The agent in charge had a lovely, high spirited daughter (I think we call that headstrong and stubborn today) who was well educated, classy, and used to getting her own way. This sophisticated young woman was brought to the post to visit her rather, although the planned visit was to be brief, for some reason she chose to stay on. Her father allowed this with the proviso that, because of the dangers of the frontier at that time, she was to be with guarded escort at all times when she left the safety of the compound.

As the young woman was an accomplished equestrian, she chose to ride a challenging and magnificent horse that may have been a bit too much for her. Slipping away from her escort guards, she took off on this spirited animal and though the men gave chase, she soon lost them. Though many continued to look for her and spent a considerable amount of time doing so, no trace of her was ever found.

They say that she can be seen every few years just a bit east of Fort Laramie on the Oregon trail, wearing a long green riding dress, still in the company of the spirited black horse she rode away on.

(Having grown up in the area, I’m not sure where she would have disappeared to as it’s open prairie, and there is a river there, the Platte River, but I would imagine had her horse thrown her, she would have been found in the water. However, though the prairie is wide open, there is a lot of land to cover and anything is possible, such as falling into a ravine that no one found.)

This building is also said to be haunted/ Built in 1870, and built for the commanding officer, it was divided into half as the officer staying there at the time, and living elsewhere, could offer this to a junior officer. This was called :”rank out the quarters” People visiting, employees cleaning there, have heard footsteps when no one was there, sounds of doors opening and closing, whispers. At night, lights can be seen occasionally. Does this mean there are ghosts? This is a strange phenomenon in itself as I’ve been in all the buddings and none of them, with the exception of the visitors center, has any electricity running to them whatsoever. 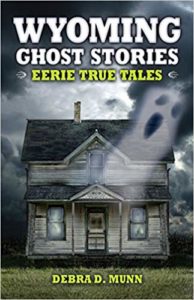 Almost everyone loves a good ghost story. The best times to read them is on a cold winter night, alone, with a hot cup of cocoa by a fireplace. At least is is for me.

Enjoy this collection of the odd an unusual on Amazon.

One of the places I find so intriguing is the Hospital. Noting much of it stands today but a shell, however many bones of interred soldiers are said to be around here. Some have been removed and re-interred with respect to a new location, but there is no doubt, being a hospital, that men probably died there. To my knowledge, I don’t think there was ever a dedicated cemetery on the Fort grounds, but they do say that a surgeon, covered in blood looking annoyed and irritable, has been seen. 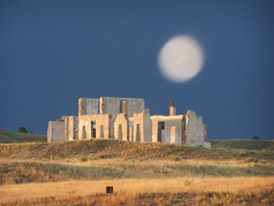 Several years ago, my sister and I were there taking photos of a a small Native American Sioux group of dancers at the Fort, but when a nasty storm whipped up turning things dark from impending rain, we decided to leave early and from the parking lot, I took my last photo of the hospital on the hill facing us. To this day, I don’t know what I captured, and while the jury is out on what I believe on ghosts, I know I caught something. Friends think I shot a photo of a bug flying past, but  whenI  blow up the photo by enlarging in a graphic program , it looks like no ‘bug’ I’ve ever seen!

As I’ve said, I’ve never actually seen anything, other than the above photo (and I only saw it after I downloaded it and viewed it up close and personal). But there has been talk of other things like a young man, for instance, who walks about in an old raincoat talking to people who aren’t there.

There is a tiny creek that runs through the Fort grounds, (it can be seen behind the jail and runs to the west back behind Old Bedlam) where there is said to be a gentleman, headless of course!, with a bad temper throwing rocks into the creek behind the building. It’s said he’s unfriendly and to be avoided, but I’m not sure what he can do if he’s incorporeal? In another area of the fort, closer to the southeast end (past the visitors center area) there is said to be a young solider who acts odd and erratic, and it is said it’s best to avoid him, too.

I have no idea if there is any truth to any of them, because I’ve never seen nor heard anyone and I’ve been there when it was dark, the time that most ghosts are said to appear., But there is absolutely no question that this area is full of history and the ground soaked with blood. With the Grattan Massacre occurring only a few miles away in a field that is now farm ground, how could it not be? That is what history is about, albeit actual and factual history or ghostly representations thereof. But if you find yourself in the area, do stop by to view the old Fort. Even if you never find a ghost, you will undoubtedly find the history of the fort and the area fascinating!

Please feel free to comment on this article. All comments, not spam, will be approved.