Found this button bonnet pattern in an old Work Basket magazine. I still have many of those magazines and I’ve kept some of them because they were my mother's or because they have such beautiful older style patterns in them.

This is where I found my button bonnet ‘pattern’. As you can see, in the 50’s these bonnets were still being worn. Probably for 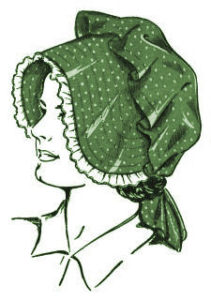 housework and gardening or something else similar.

You can also tell that there’s hardly any kind of instructions at all, not like what most of us consider today to be instructions.

Lastly, you'll see, (and read) that ties aren't mentioned at all. I added ties to mine because I don't think a bonnet will sit or stay very well without them.

The following are the instructions I found. See if you can follow them. They really aren’t all that difficult but I still thought it would be a challenge to try making one and to take pics of it as I went. Which is how the Button Bonnet pattern post came about.

The proportions shown on the chart should remain, but the scale may be varied to suit the size you plan–two and a quarter inches for each square will come out about right for the bonnet for an adult. The straight side of the brim should measure 18 inches and crown piece should be 20 inches long and 16 inches at the widest point-enlarge the scale accordingly. For a child’s bonnet, make the squares smaller.

Face the crown piece all around with a bias strip cut an inch and a half wide. Then sew a bias casing at X for drawstrings; work

an eyelet in the center of casing and fasten strings at the side seams; later, tie them at center.

Cut an interfacing of heavy muslin and stitch with both brim pieces. Turn right side out and stitch around curve–as many rows as desired. Whip the straight edge. If you wish a light-weight slat type brim, it can be done with long emery boards from the manicure goods section. Use these stiff boards as slats, sipping them into channels that are stitched crosswise just outside a penciled outline of the emery boards; leave one end open so the “slats” may be removed for laundering.

Now, I haven't tried sewing in any slat pockets…yet. But that will definitely be my next step. I want to get the pattern on this bonnet just so, as in how I like it. When I wrote the previous post on the Button Sunbonnet, I was trying to follow the instructions above and honestly, some of it was still guess work. My guess is that it was in 1952 as well.

Remember that I also added ties and I also sewed a drawstring. The instructions alluded to a drawstring(s) but doesn't say how long, how wide, how it should be sewn. I am assuming this button bonnet pattern was up for interpretation.

One thought; when making the bonnet bonnet pattern, you can draw vertical lines for slats but it might be easier to make the pockets larger for something other than emery boards. Don't know what they were like in the 1950's but I imagine they were far sturdier than the emery boards we use today. Hands down my opinion is that sewing a sturdy insert of pellon or somethig similar is much, much simpler.

If you do try this bonnet from this pattern, comment on how it went. I'd love to hear about it.