Making a Button Bonnet for a Newborn

I wanted to make a snap bonnet or a baby button sunbonnet for infants that was a bit different from the other patterns I saw everywhere. Most of them are very cute! but they didn't have the neck ruffle on the bottom. While I was aware this wasn't needed, I personally like it because it added a tiny bit more sun protection along baby's neckline than many other styles. 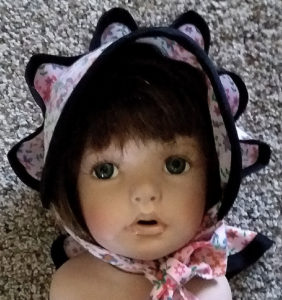 I did play around with several different kinds of materials and I know the higher end bonnets I see for sale use lovely materials like silk and linen, but I also decided to consider that the average mom has to wash these things when they get dirty. And I considered that the average baby can get very messy! And if you don't live near a well supplied fabric store that carries some of these higher end fabrics, any colorful cotton fabric you have on hand will work as well and make your baby girl look awesome. And all babies look perfect, don't they? (All mom's shouting 'yes!')

Another thing I factored in is that most mom's don't want to spend a lot of time trying to find the pattern and color they want in the right linen or the right silk or rayon…..and there are instead so many fun prints to choose from that are easy to find only in the breezy summer cottons. So. That is what I stayed with. 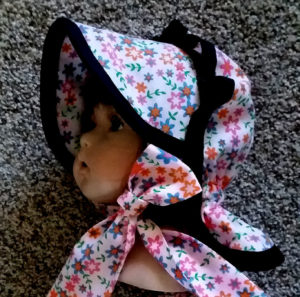 The pics I found of button bonnets were cute. They were made a bit differently and there were a few extra steps that I thought could be used in a different place so I made this baby bonnet a tad bit different.

I used a black binding on the pink flowered patterned material because it was a striking contrast and made it much easier to see what I was doing when I took pictures of the steps I went through to make and sew the bonnet.

A model doll was used on the newborn bonnet doll and although she looks like she is older because of the amount of hair she has, her head is newborn size if not even a bit smaller.

My bad….I forgot to measure how much I used in the bonnet (I'll do that when I write up the pattern for download) but I don't think it was even 1/4 yard. So it would be a simple matter to use any of your best and most colorful pieces to make a simple button bonnet for your new born baby girl.

Once you have picked out your material, lay it flat to cut. The cap part of the pattern can be laid flat to cut one back piece out or it can be laid on the fold and cut.

Just a Few Pieces of Material, Less than 1/4 Yard for this Infant Baby Button SunBonnet

The cap back can be placed and cut on a fold if you are short of material and trying to squeeze things out. But even using only the remants of a piece I used originally for a blouse, there was plenty left to work with. Just keep in mind that if you lay it flat to cut out, you will be cutting TWO bonnet cap backs instead of one. At the bottom left is the tie. This was also placed on the fold and you will have to cut two. Or, fold it out and lay it flat on your material to cut out two. 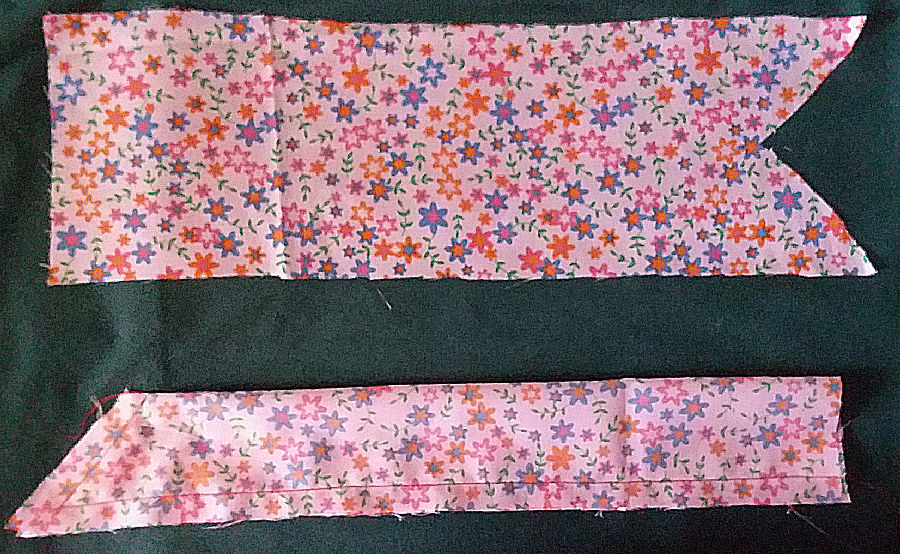 Cutting out and sewing the ties

I unfolded my tie pattern and cut out two of them. Then, with the right sides together, I sewed a seam around the edge. 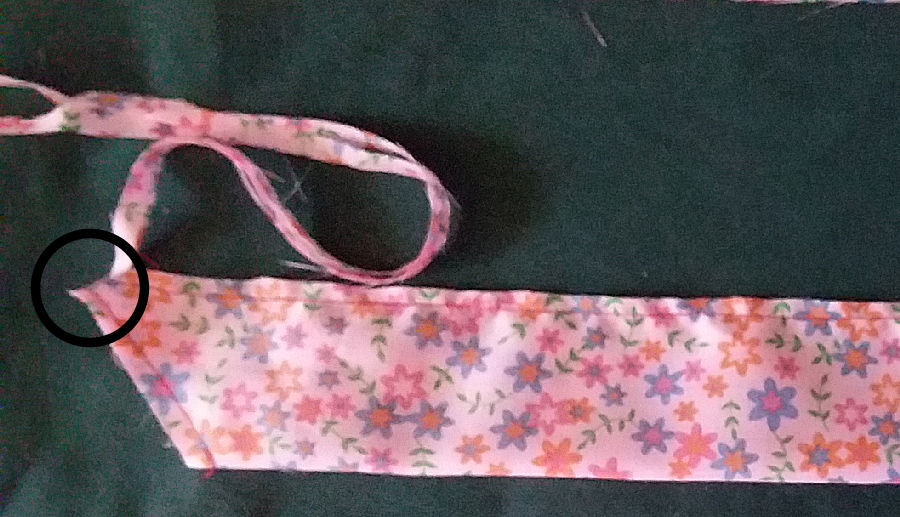 Before you can turn the ties inside out for pressing, you will need to trim the edges and trim the corner. Clipping a bit off the pointed corner will reduce the bulk inside the tie when you turn it inside out before pressing. 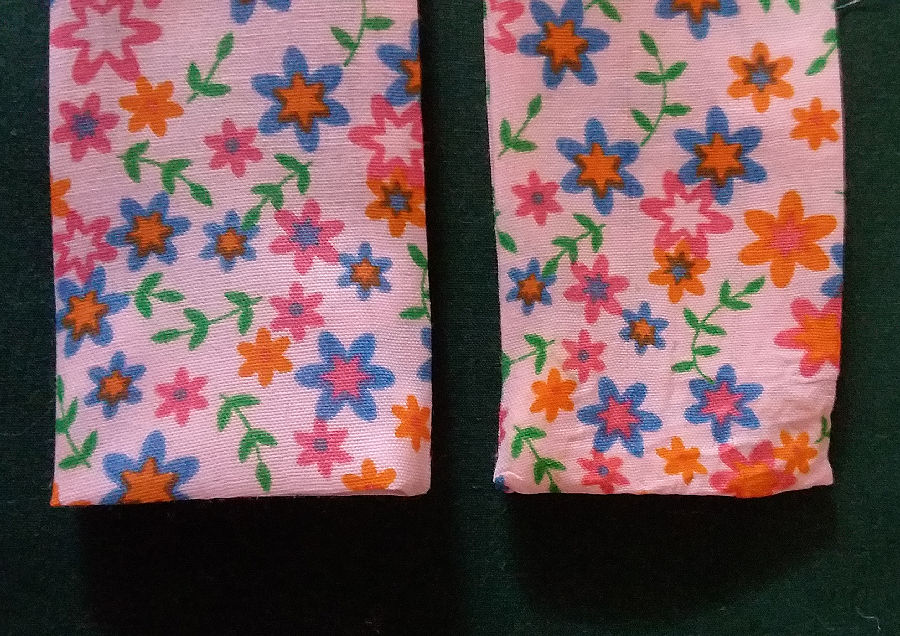 When your ties have been sewn, trimmed, turned back inside out and pressed, take the top edges of the ties and fold them inward about 1/4 of an inch and press again. This isn't a necessary step, but I did it because I thought that, when the ties are sewn on the brim, it gives a finished look. Otherwise, the raw edges need to be trimmed. This way, they look a bit more tailored. 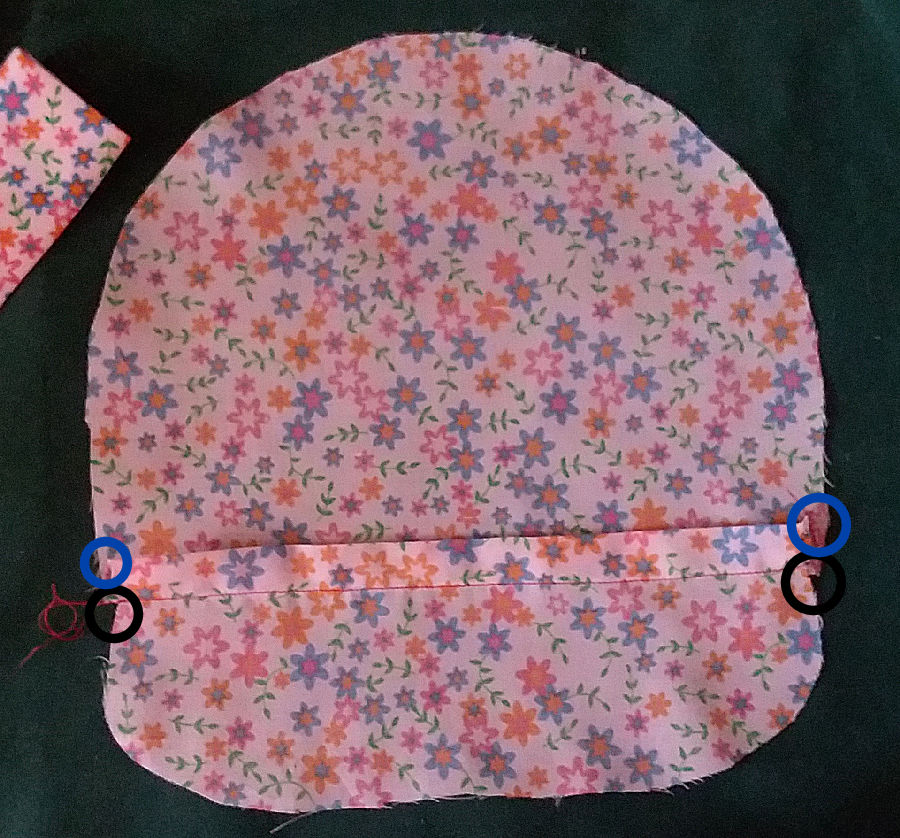 I added a small 'neck ruffle' by adding a few more inches at the bottom and then rounding off. On the pattern you will see that there are two lines that make the casing. One labeled A and the other B. Pin A to B and fold. Then press with your iron. Stitch along the line A. (Black Circles) Fold the casing toward the top and iron once more. Make a tiny hole in the center of the casing with your scissors before you top stitch. This will make it easier to pull your drawstring through at the center. 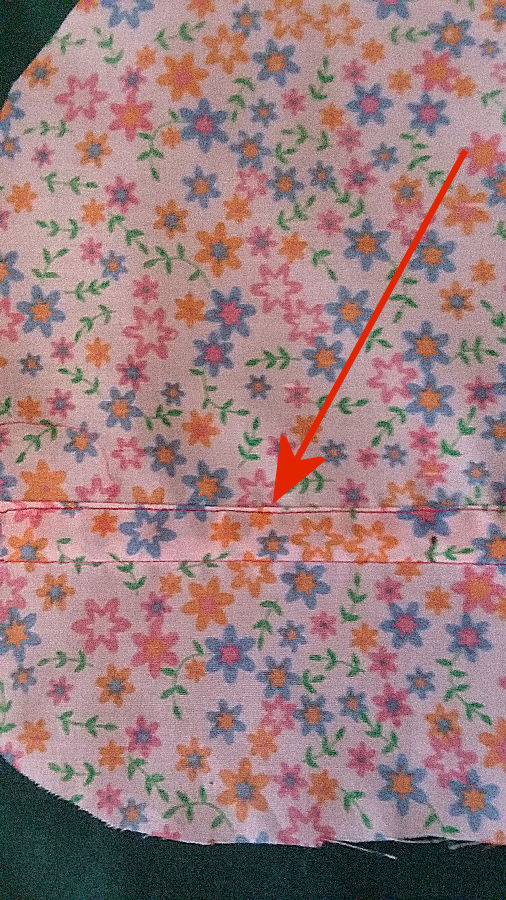 This shows the top stitching on the casing. Cut a small piece of material about 12 inches long and 1 inch wide. Fold the raw edges into the center and inside, then press. Fold the drawstring in half once more and press. 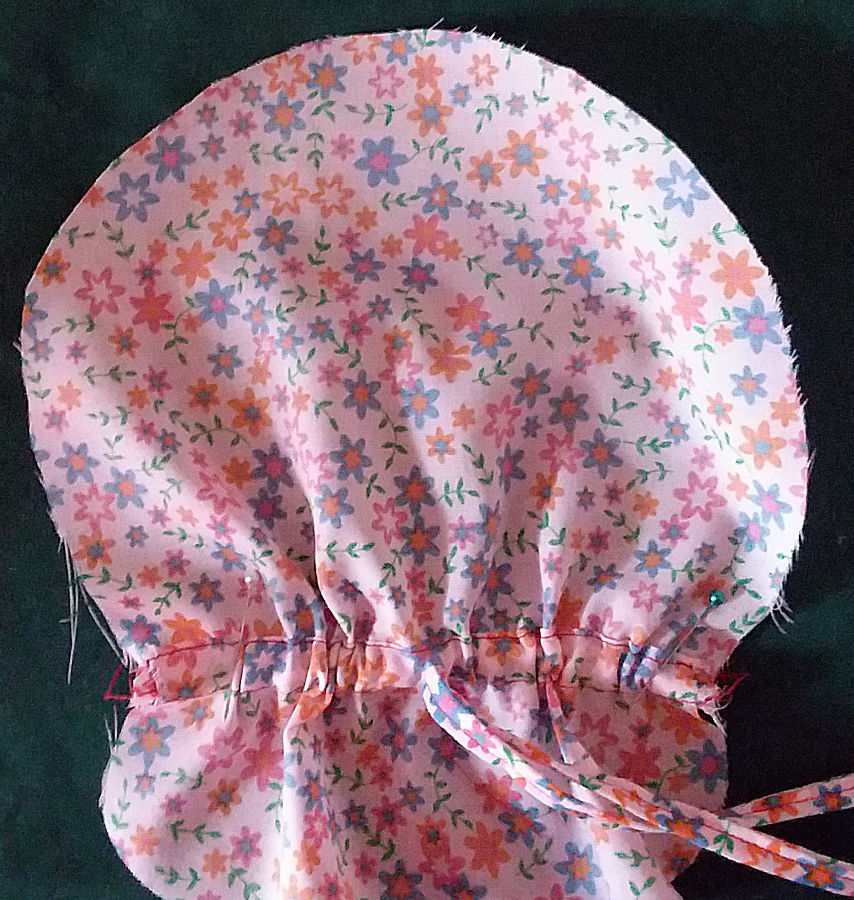 I didn't have any pellon on hand and the material I used was pretty light weight so I knew I needed something to give the brim a bit of firmness. I used some heavier weight material, a light color so it wouldn't show through the bonnet brim, and then I trimmed it about 1/4" below the material bonnet brim pieces. 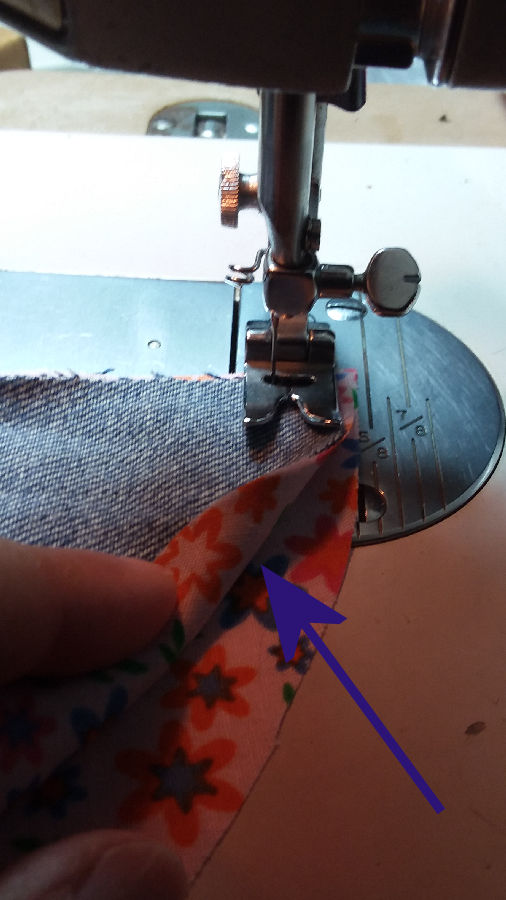 Place right side pieces of the bonnet brim together and then add the pellon, if you have it, or a heavier weight of material that you have trimmed to fit over the top. Sew the brim together leaving the top part open for so that the brim can be turned inside out later. 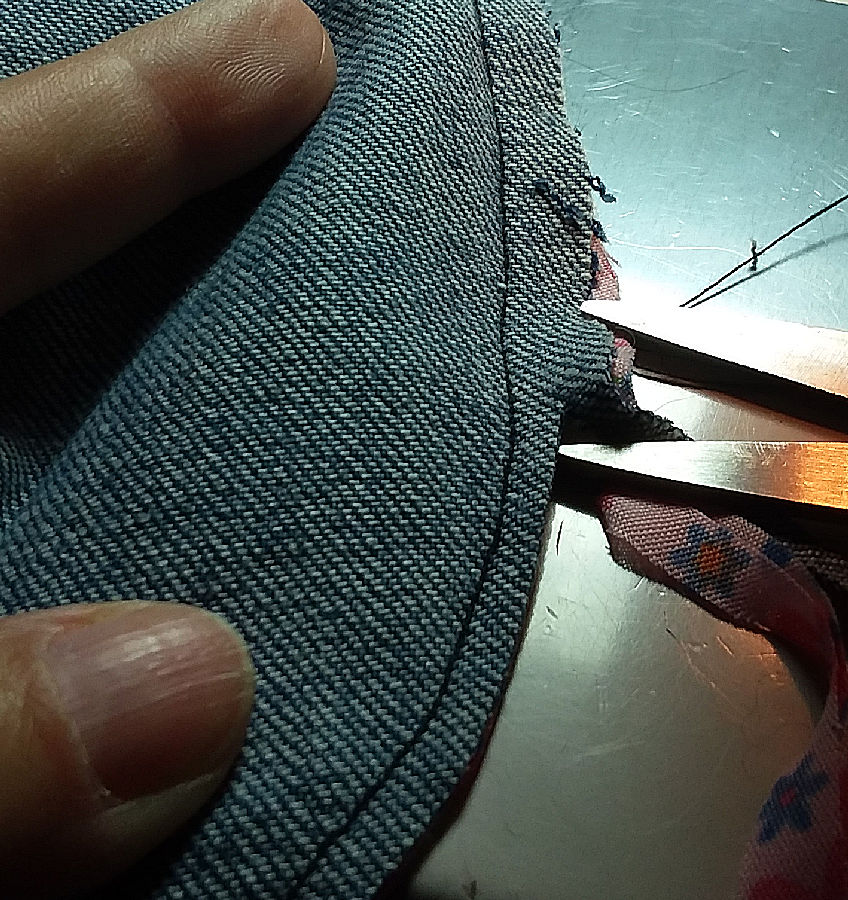 After you have sewn the brim, trim the seam edge. Turn the brim inside out and press, getting as close to the outside of the edge of the brim and press neatly as possible. 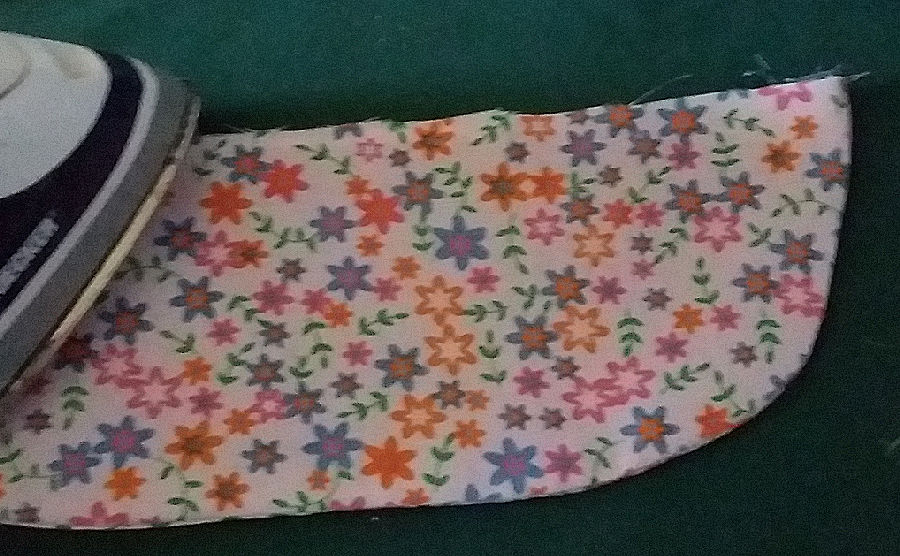 It can be a bit hard to press the seamed edges so I try to pinch and roll the fabric as much as possible so that I can press close to the seam edge. This will leave no rolled under edges if you do it right. 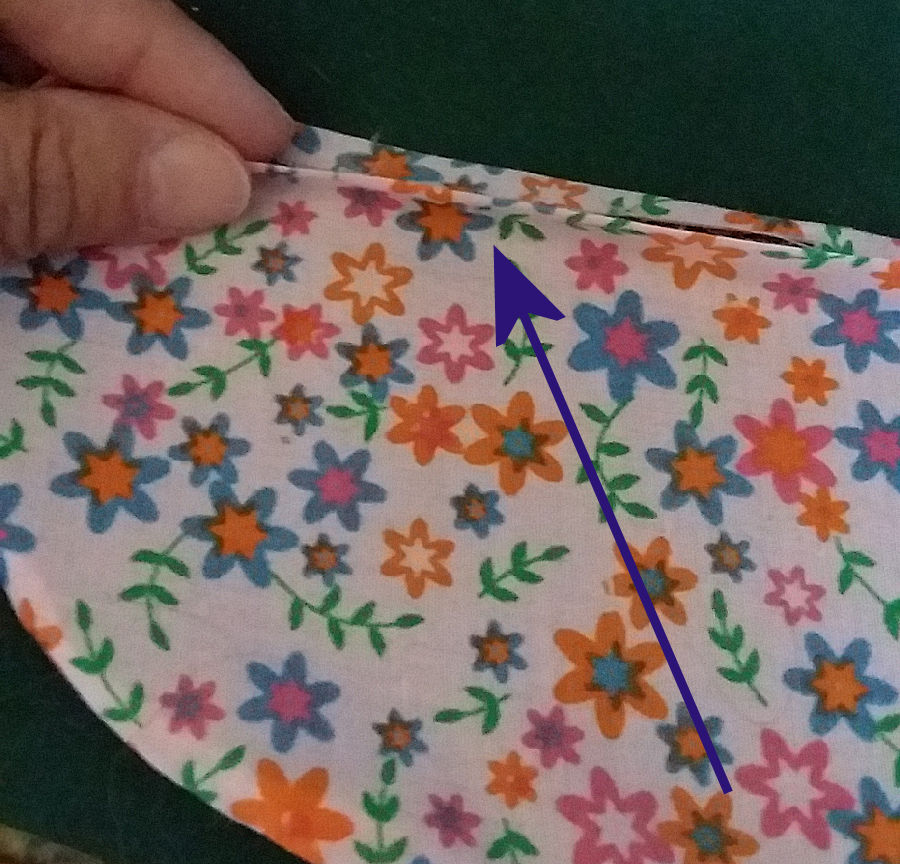 You do not have to do this step if you are using seam binding, like I did, but I wanted to show you what I was doing and why in the event I did not use seam binding on the brim.

Once the bonnet has been pressed, I took the top edge of the brim, folding it under 1/4" and inside the bonnet before pressing and top stitching. TThis was the reason why I cut the interfacing a bit lower than the outer brim pieces. This gives a nicer finished edge without raw edges of material showing. If you zig zag the edges closed, that will also work. 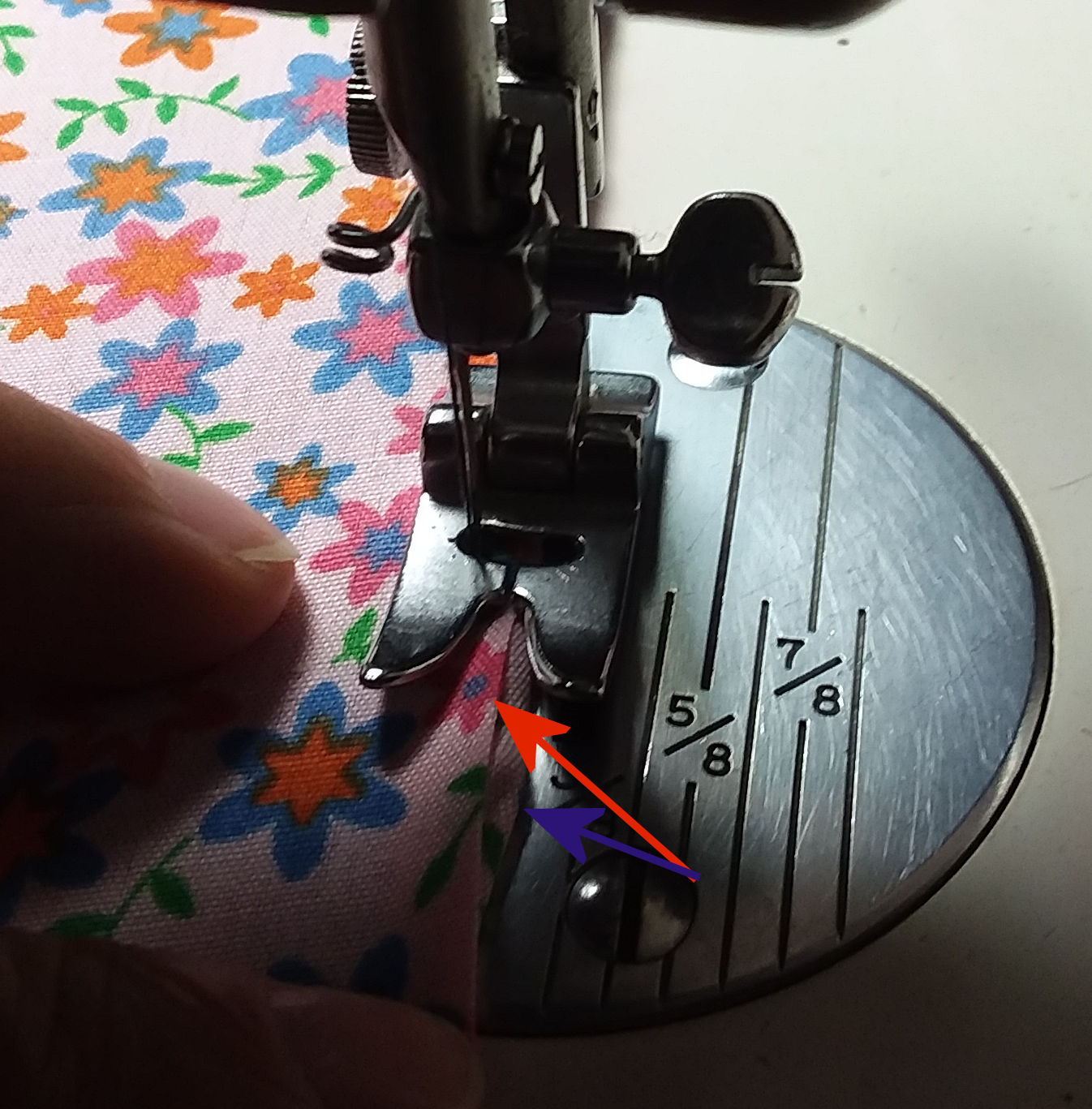 I have the top edges of the brim under the needle and they are off just a bit to show how they 'fit'. Bring both edges together and top stitch from the first open end of the brim to the opposite end. Trim threads. 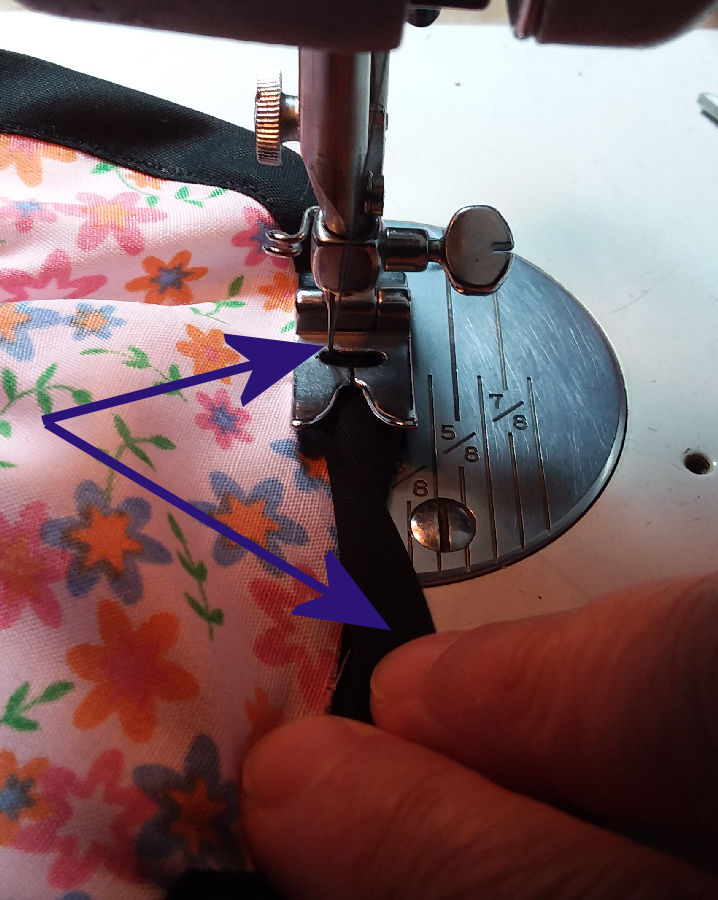 I chose the black binding so that it could be seen better. But the striking contrast turned out pretty cool…better than I thought! Before sewing, cut about 1/2" off the binding at an angle and pin in place at the bottom of the bonnet cap, where the bottom of the neck ruffle is. Start stiching about 1 inch away from the pinned bias edging and sew the binding aroung the entire cap. Make sure the raw edge of your back bonnet cap is exactly entered in the middle of the binding before sewing. When you come close the end of sewing your binding around the entire cap, cut your binding at an angle again and place the remainder over the beginning of the cut binding. Sew over the top so that both are sewn together with the bonnet material sandwiched firmly inbetween. 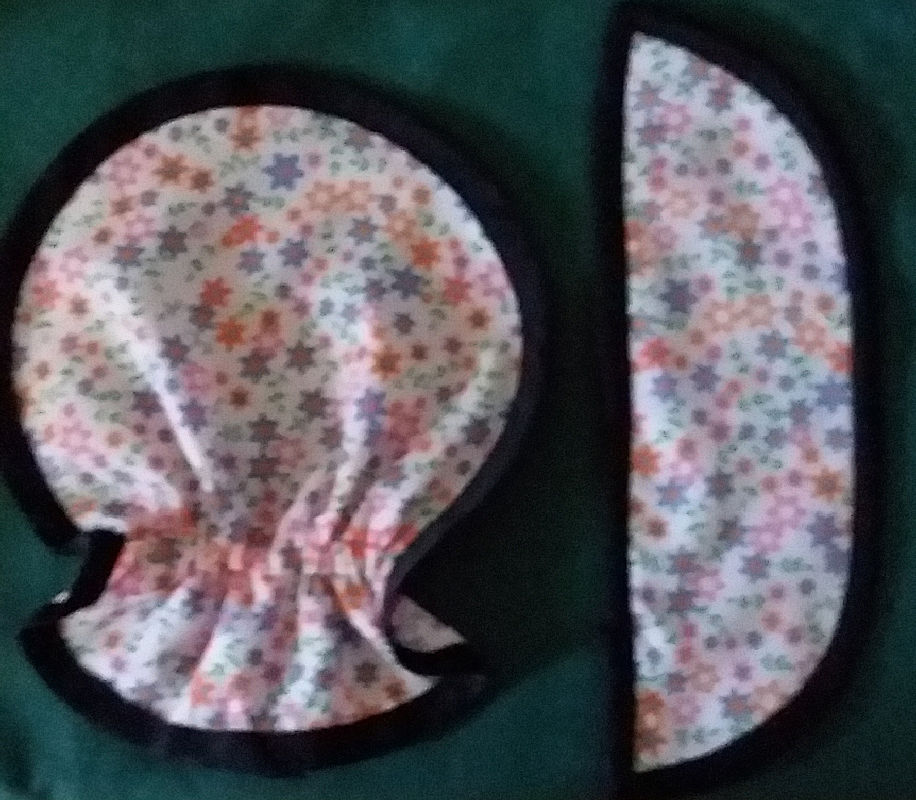 Both pieces are finished with the binding in place. The last thing is to place your button holes for buttons, or snaps. The placement is on the pattern but briefly it works like this…..fold your brim in half and pin the center. Fold the cap in half and pin in the center. Match these two pin points and re-pin. Next, take the top of the bonnet brim on either the right or left and pin it to just above the top stitching of the casing. Pin in place. Match the other side and pin in place. Mark two even spaced places for pin placement on the remaining left and right side of the bonnet. Pin to mark placement for buttons or snaps.

Sew the button holes on the cap on the top side. Match the buttons to these holes and sew on buttons. ( I have found some of the CUTEST buttons from frogs, to daisies to ice cream cones…they are such fun to work with!)

If you don't want to go through that work, and I didn't this time, simply top stich the brim to the bonnet in these 5-7 pinned points. I chose to use 7 points for the snaps as I thought it seemed more balanced.

If I missed something or didn't explain it correctly, let me know. I will be happy to help. 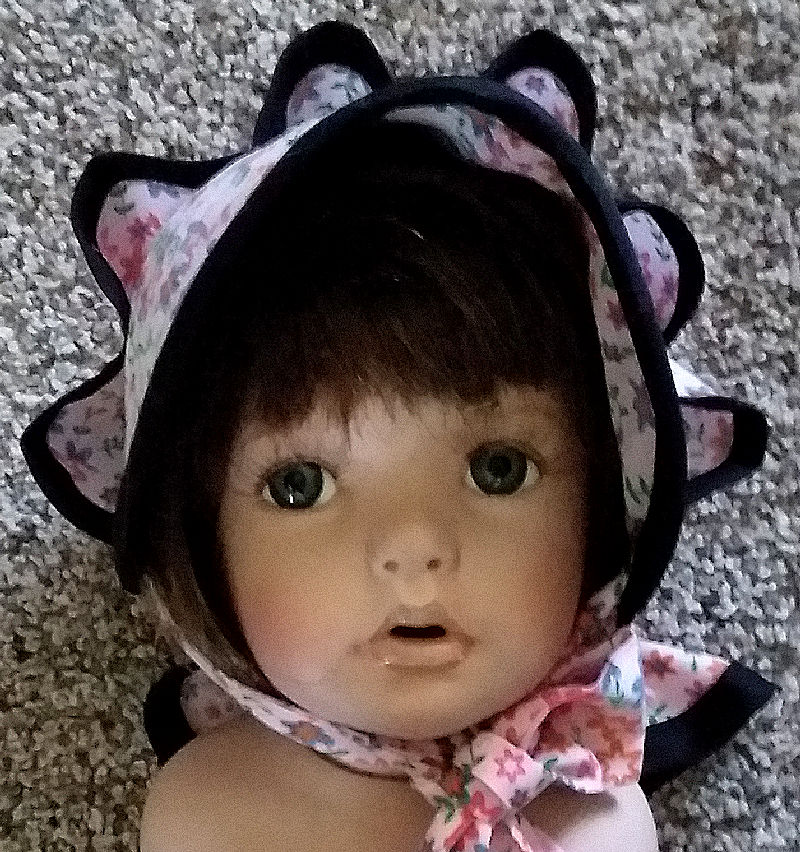 Here are the patttern pieces.
Click on the image to view the larger image and download by right clicking and selecting 'Save Image As".
When printed, make sure the cap is 10.75 " from top to bottom and 9": wide from side to side, Adjust by enlarging or decreaseing as needed.
Take the two brim pieces together and, when printed, make sure it is  4.5 " from top to bottom measureing at the center and 12.5 " from side to side. measuring at each corner. 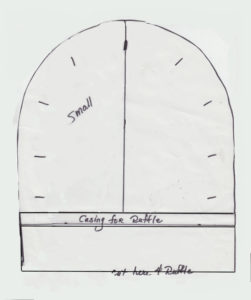 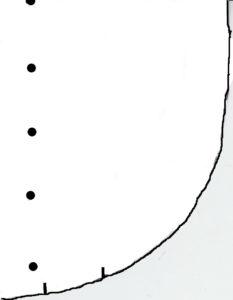 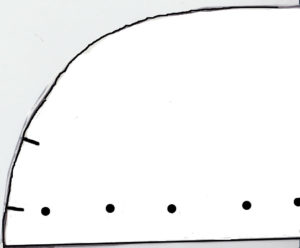