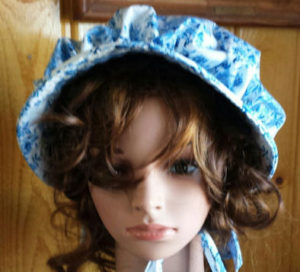 DID YOU KNOW…? 7 Fun Facts About Sun Bonnets

1.       DID YOU KNOW?…That little girls often wore an adult sized bonnet rather than a bonnet that was of a better fit.


For prairie women, material was at a premium. So flour sacks, old dresses and shirts were saved so that pieces could be cut from them to make bonnets for protection from the sun and wind. It was easiest for a woman to make a bonnet one sized (as often they didn’t have patterns) so that it could be worn on her daughter. The same sized bonnet would suit her just as well. This saved time and material as these women didn’t need to make a bonnet to fit their daughters through different growth stages.

2.       DID YOU KNOW? ….That poorer women wore bonnets made out of all kinds of scraps that were sewn together.

Not only was material expensive for prairie women ( I always think of them as farm and ranch women…and that’s what they were!), but so was thread and a packet of needles. In remote areas, the cost of bringing in these supplies could be exorbitant and prohibitive to people who didn’t have the money to spend. I tend to think of women back then as the first recyclers. They recycled or repurposed flour sacks, sheets, shirts and old dresses to get a bit of extra life from the material. Pants beyond patching? Make a quilt. Dress stained beyond cleaning? Make some curtains. And in this way, bonnets were also made. If they were blessed to have enough scrap material, they might even make a bonnet of the same material and color.

3.       DID YOU KNOW?….That the main idea for a bonnet was just to protect their skin from the sun and wind.

We tend to think of bonnets as more of a fashion statement today. But truly, the opposite was true over 100 years ago. If a woman got a tan working outdoors, she was considered of a lower class and common. So, even if she didn’t have the money needed for a good bonnet, she made one from the things she had on hand. This not only protected her from the wind, but the effects of the scorching sun and the dreaded tanned skin that was so frowned upon at that time.

4.       DID YOU KNOW? …that sometimes they sewed the brim in strips so that cardboard could be inserted to stiffen it.

Women would starch their bonnets to make them stiff enough so that the brim would stand firm over their face keeping the sun out of their eyes and the brim from flopping down into their eyes. This could make the bonnet a bit stiff and cardboard-like as well as uncomfortable. So, just like bone whale sewn inside of a corset to stiffen it and keep it in shape, so were cardboard insets used in the bonnet brim of some bonnets. These women simply cut strips of the required width and length to fit inside ‘pocket strips’ that were sewn on the brim’s surface. When it was time for washing, the cardboard strips were removed and then replaced when the bonnet was dry.

5.       DID YOU KNOW? …..That these women usually didn't have a pattern to go by…..but instead cut and sewed pieces by guesswork.

If you are a seamstress, you love to have a pattern to go by. So do I. It makes it easier and less time consuming for me that someone has done all the work and taken all the guesswork out of the exact measurements I need to make a hat, blouse, or pair of pants. Many women didn’t have these patterns. But they knew what they needed, they knew what the bonnet had to accomplish and how much skin it needed to cover, so they simply set to work making and educated guess as to how long or wide each piece should be. If it was too wide or too long, gathering the materials or hemming it up also served the purpose to make the bonnet fit. If it worked, then it was used as a pattern for a future bonnet. This is part of the reason why we see several different styles or models of gathered bonnets for the time period.

6.  DID YOU KNOW?….that some brims were so long and so wide that it was much like the blinders that horses used to wear.

Besides the reason for protection against the prairie sun and winds, bonnets were a form of modesty. Both for the single woman and the married woman. The shaded brim offered protection from prying male eyes with the brim coverage it offered. But they also acted like blinders on a woman reducing her vision as well as her hearing by blocking sounds around her. I would imagine this caused, if not a few em7. barrassing moments, possible some accidents as well !

7. DID YOU KNOW? ….That some women deliberately made the brims longer and wider for extra privacy.

You already know that the brims were made longer to protect them from the elements and give them privacy. But did you know that some women craved even more privacy and thus created brims that were even longer and wider. Bonnets that had these kinds of brims were the mark of modesty in a woman. But as the new century approached, and bonnet headgear went out of fashion, only the most modest of the older group of women wore them. Thus creating the idea that only ‘little old ladies’ wore bonnets.